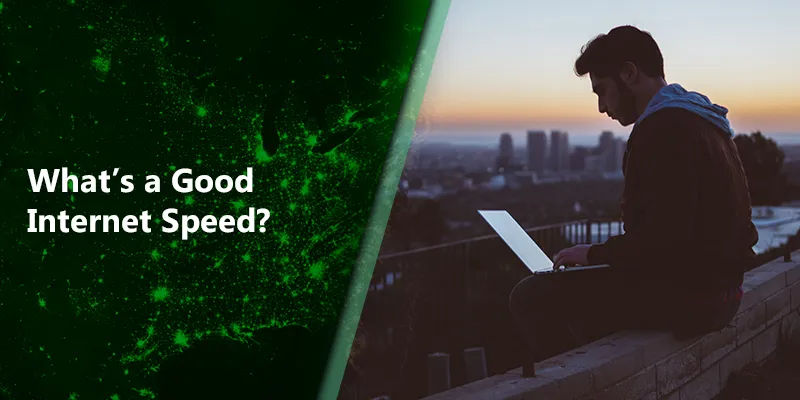 A common concern for any internet user is whether their internet connection is fast enough. You may wonder whether your connection is good for a whole bunch of applications of residential broadband. You’re not alone. That’s why speed test websites exist. We’ve examined the data published from these sources as well as other credible tech websites to find out the average download speeds in the United States by the service providers. This gives you a good idea regarding the broadband industry in the United States. You can compare your existing internet package versus those from the highest performing internet service providers and make up your mind about switching or staying put if you’re smart enough to be subscribed to a top provider. Before we dive in to compare providers’ speeds, let’s take a look at the factors which are considered to rate internet connections.

To truly find out what good internet speed is, you’ve got to look at more than just “download speed”. Here are the important factors to consider in an internet connection:

This is the capacity of a communication network to transfer data from one end to another in one second. Think of it as a highway. The more lanes there are, the greater the number of cars that can pass any point in a second.

The unit of digital information is a bit. The Megabit is 106 (1 million) of a bit. So, 1 megabit = 106bits = 1000000bits = 1000 kilobits. This means bandwidth is measured by the Megabits per second (Mbps) rating of a connection. It’s the data transfer rate which makes a big difference to your internet speed.

The download speed is the rate of information retrieval from a website and delivery to your device. It’s dependent on the factors mentioned here. Your internet connection provider advertises certain speeds, against which you can measure the download speed you’re actually getting at home.

Data transmission across networks occurs in “packets”, and data failing to reach its destination is considered as packet loss. This is a bigger problem with wireless networks. Packet loss is measured as a frame loss rate, defined as the percentage of packets lost with respect to packets sent. A packet loss of ≤1% is ideal.

This is how long it takes for a bit of data to travel across the network from one endpoint to another, and come back. The internet is run by servers. If you’re transmitting to a server on the other side of the world, the latency will presumably be higher than communication with a closer server. It’s also what’s called “ping” by gamers. Measured in milliseconds, the lower the ping, the better your latency rating and the quality of your experience. Besides distance, latency is caused by network congestion. Latency should ideally be ≤150 ms.

Jitter is the irregular time delay in the sending of data packets over a network. Jitter should ideally be ≤ 30 ms.

Fastest Internet Service Providers in the US

One of the most popular internet service providers countrywide, Xfinity’s average download speed is 104.67 Mbps. That’s enough for a family of over half a dozen people living in the same home, using the internet intensively, simultaneously. The average latency of 95 ms is within the recommended range of ≤100ms. The jitter could be better at 315 ms but you won’t notice it unless you’re streaming 4k video or gaming at a high frame rate per second. Xfinity is an excellent choice for families and housemates looking for good internet speed.

The fiber optic based Frontier FiOS is ranked the number one internet service by the speed in the United States. The average speed of this provider is 138 Mbps. That’s pretty zippy! If Verizon FiOS is available in your area, this is the best choice for good internet speed. The average latency is 22 ms, packet loss is 0.67% and jitter is 0 ms. These are excellent scores.

This internet service provider is highly rated. It is delivering an average speed of 103.56 Mbps. Most Cox Communications internet packages are advertised as “up to 100 Mbps”, which means Cox is exceeding its promised speed. The average latency is 73 ms, which is very good. The average jitter is better than other ISPs at 284 ms. Overall, Cox is an excellent choice for fast internet speed.

For those who live with less than five people at home,Spectrum is a good choice for fast internet at an average speed of 87.56 Mbps. The reason that Spectrum is popular is its excellent double play and triple-play packages and reasonable pricing. The small difference in average download speed is offset by pocket-friendly bundles. Get cable TV service along with your internet to complete your home entertainment services. The average latency hovers around the 100ms mark. The average jitter is 317ms.

A household brand name in the US, another option for good internet speed is AT&T internet at an average speed of 76 Mbps. Just like Spectrum, this lower average speed is not because of a lack of ability, rather due to the internet plans in the lower price tiers. That’s a good thing for consumers looking for the internet that doesn’t break the bank. The average latency is within an acceptable range of ≤100 ms. The average jitter is better than many other competitors at 309 ms.

Now that you know the average download speeds and other metrics for each major US internet service provider, you can search for the best internet packages in your area. BuyTVInternetPhone provides a handy tool to find and compare internet offers in your zip code. Tens of thousands of people in every state have already used BuyTVInternetPhone to find and order an internet package that fits their needs and budget.

Which Channel Number is FX on Spectrum TV?

What You Should Know About Cox Services in San Diego

The Best Cox Services You Can Subscribe To In Omaha